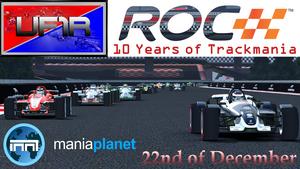 Who is the best circuit driver in Trackmania? This is a knockout tournament designed to find out. Prove yourself against the best UF1R drivers, including 4 time Champion Sammy from Belgium, his Australian arch-nemesis Roy, as well as up and coming race winning drivers like Edster from the U.K. and Iron from Belgium. We are holding this event to celebrate 10 years of this magnificent game, as well as 5 years of our own, more humble UF1R league.
Just like in the real Race of Champions, (Which this year takes place in Bangkok, Thailand) drivers participate in 1 vs. 1 matches against each other; players start by being drawn into random matches with another player of similar skill level, and for each race they are assigned a lane (Left or right) which they turn into at the start. (The track crosses over, so you will need to drive both routes) The victorious players progress on to the next stage of the competition.
There are 4 Stages in all, (2 heats, followed by Quarter and Semi finals) following which there will be the Final. Players who finish high enough to reach the final (Let’s say top 8 or so) will be awarded Goody bags courtesy of Nadeo; (With a special prize for the overall winner) unfortunately due to shipping costs Non-European winners will have to be content with player keys as their accolade.
We will put the track on our server for practice (Which you can join here: http://trackmaniaserver.org/join/43623) starting the proceeding week (16th of December) where from the times set we will decide which Pool you start off in during the heats based off of the fastest time you set during the week. (To ensure someone like Sammy doesn’t thrash inexperienced players)
Just a heads up: This event will use a mandatory in-car camera, which might take some getting used to. Unlike in our GP series, sliding will be allowed, as to prevent alienating anyone. However, cheating, hacking, blackmailing other players and other such malicious activities obviously will not be tolerated; we just want everyone to have fun and enjoy himself or herself (Girls are free to enter as well, in case you were wondering) in a safe and friendly environment.
I will be making a video of the event, so those that miss it can still enjoy it. If you fancy having a go at live-streaming this event, or have any other questions about anything else, contact me at edwardjhunter@virginmedia.com or on the forums at http://www.ultimatef1racing.com and we will do our best to support you.
I sincerely hope you enjoy this ambitious but all inclusive event; thanks to Amelie and all the folks at Nadeo for supporting this and agreeing to help give out prizes.

I apologise for the change of decision if anyone had already signed up there. (Although by the looks of things nobody else is interested) But it is pretty quick to sign up to our forum, and well worth it to take part in our competition.