This is the twelfth article about the top twenty TrackMania²: Stadium tech drivers of 2014. For more information, see the first post. 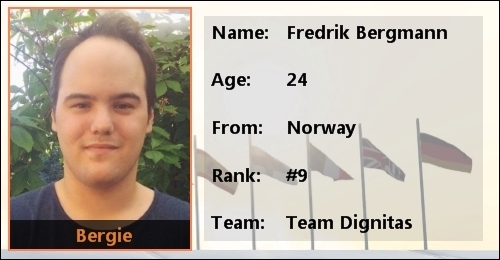 Fredrik “Bergie” Bergmann. He is the long-time leader of Team Dignitas, which has without doubt been the most successful team for a number of years. Both accomplished in terms of online and LAN achievements, Bergmann impressed us enough this year to warrant a spot in the top 10.
At the beginning of the year, the Dignitas squad took part in the Competition Premiership Season 12 playoffs. Since Team Dignitas finished first in the group stage, they were paired with 4th-place-finishers PyRoGEN for one of the the semi-finals. After Dignitas won both the one-on-one and two-on-two submatches, the Norwegian stepped up to play the three versus three. Bergmann and

Jesper "KarjeN" Karjalainen didn't need to do a lot, since

Carl-Antoni "Carl Jr." Cloutier played out of his mind and won every round in what was a 7-0 stomping of PyRoGEN.
In the grand final, Bergmann played only the two-on-two submatch in what was a clear stomping of Team Acer by Team Dignitas. He and Karjalainen managed to win it 5-3, outplaying

Ördög "Royal" Botond, the latter of whom unable to match the level of the Dignitas drivers. Bergmann's teammates then showed prowess in what was a whitewash of a 3v3 on "ESL - KUBINATOR", a somewhat notorious map built by

Martin "Kappa" Krompolc.
Next up for Bergmann's Dignitas was TrackMania Masters Team Cup 14. As expected, they had few problems passing the group stage. It's fair to say that their first true challenge was their quarter final match against BX3. Despite Karjalainen and

Dennis "Massa" Løtze gaining the most points on the first map,  BX3 took it 7-5 since Bergmann lagged behind and Cloutier had an uncharacteristically bad match. After Dignitas equalled the score by winning the next submatch, a third map was played to decide who would make it to the semi-finals. This time, it is Bergmann and Cloutier, who let their team down on the first map, who importantly step it up. Rather fittingly, it was Dignitas team captain Bergmann who won the last round and led his team forward to the semi-finals.
Bergmann didn't play in Team Dignitas' semi-final match against Team Acer, but was back to assist his team in the grand final, where they met somewhat unexpected finalists Druidz. He played both maps in what was a relatively quick 2-0 victory for the favourites Dignitas. On both maps, Bergmann was solid, not needing to take up a carrying role because of the consistency of his teammates.
The next event for Dignitas in 2014 was ESL CPS13. Bergmann's groupstage was fairly quiet; he did not drive outstandingly, but did enough each time to ensure that his team won the group stage. Due to changes implemented between seasons 12 and 13 of the ESL competition, this put the defending champions straight to the grand final of the playoffs. Team Acer, the clear second-place team at this point, met them in the grand final. We first see Bergmann play in the three versus three submatch. Despite an impressive performance from Bergmann, the Acer players triumpthed in the 3v3, and Team Dignitas now needed to secure a win in the 5v5 to have a shot at overall victory in the final. Unable to drive as well in this next submatch, Bergmann is the worst scoring Dignitas player. However,

Henri "Insane" Kyynäräinen ensure that the Dignitas side take the map. Bergmann's decider submatch is also rather disappointing, and he again is the worst scoring player for his team, leaving his teammates to win the rounds and ultimately take the match.
In early Autumn, Bergmann teamed up with Cloutier for TrackMania Tournament's "Multilaps 2014" competition, in which teams of two players drive laps on multilap tracks rather than the usual "A to B" style trakcs used in most competitions. In one of the semi-finals they defeated team Nord, made up of

Jonathan "Slink" Stenström (Stenström then went by "Manta"). Bergmann played well and actually carried on the second map in his side's 2-0 victory. Cloutier and Bergmann, under the name Dignitas's Fault, made it to the tournament final, where they met

Jakub "kubayz" Faul. Although Cloutier was clearly the man of the match, Bergmann was as good as or better than his Czech opponents, and therefore credit for his team's victory over their eSuba opponents for first place in the tournament.
Bergmann's first  solo competition result came in September in the form of a third place finish in Stadium Giant Cup 1. After a strong run in the tournament's first few matches, he took third in the winners bracket final, losing to team mate

Tim "Spam" Lunenburg by twelve points (in Giant Cup events, there is no finalist mode, and the points totals after a number of rounds determine the result of each match). In the consolation final, Bergmann looked unphased by this narrow defeat, gathering the most points and earning a spot in the grand final with fellow consolation-finalist

Benjamin "Kronos" Suzenne took first place in the final after a dominant performance, while Bergmann took third. Overall, an impressive result for the Norwegian considering the calibre of the cup's entrants. 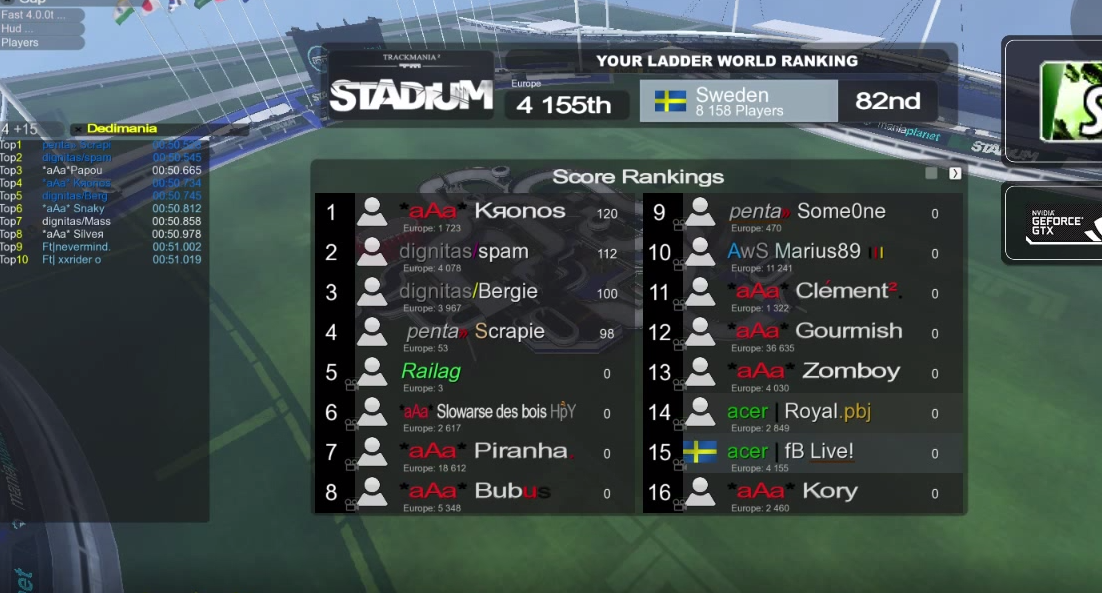 Bergie takes third in Stadium Giant Cup 1.
Just a month and a half after SGC1 came Electronic Sports World Cup, the biggest event of the year for many top TrackMania players. It is fair to say that Bergmann is a player who thrives under the pressure of LAN, helping him to win the event in 2010 and make the grand final in 2013. Before the main event, Bergmann beat

Peter "znik" Skarstein at the Oslo-based Gigacon LAN to qualify for the event, making a comeback after Skarstein reached finalist mode to take first place.
At the main event in Paris, Bergmann won his first match. Unlike some of the other players at the event, Bergmann had no easy ride, facing the established

Eric "hakkiJunior" Leštach. Thanks to that he continued to the second round of the winners bracket. He ended up in what could be considered a "group of death", with opponents Pacher,

Leo "Leo" Faclomer-Dawson. Pacher wins the match rather easily, as many expected, but there was a real fight for second between Schobbers and Bergmann. Both players eventually reached finalist mode, and the final round of the match started close. However, as Bergmann reached the final few turns of the map, he had a significant lead over the Dutchman. Despite this, Bergmann, seemingly unaware of how big his advantage was going into the last turn, took the riskier, "bug" finish, resulting in him failing to finish the round. Schobbers, seeing this, opted for the safe finish, and takes second place in the match.
Although clearly affected by his mistake, Bergmann managed to regain his focus before his first match in the losers bracket. After winning his first match in the lower tree convincingly, he faced familiar opponents Leštach, Falcomer-Dawson and Løtze. In this match, Bergmann was the first to reach finalist mode, but Løtze caught up and was soon on the cusp of advancing himself. After a close battle, the outcome of which looked uncertain even before the final turn of the map, Bergmann was beaten by his German teammate. Bergmann, who in this match struggled on map "ESWC 2014 - Kaksseiskatseta", allowed Falcomer-Dawson to win three rounds in a row and also reach finalist mode. The map then changed, and the experienced Norwegian handled the pressure better than his British opponent in the final round to take second in the group and secure a spot in one of the losers bracket semi-finals.
The next matches were played the following day, and in Bergmann's losers bracket semi-final he once again would play against Schobbers, this time accompanied by Skarstein and

Robert "Tamarillo" Crone. In another fine showing, Bergmann is again the first of the four players to reach finalist mode, but just as in his last winners bracket match, he is unable to take first place. Crone instead takes first, and leaves Bergmann to fend off Shobbers in what ended up being a two-horse-race between them. Bergmann, unable take a round win, allows Schobbers to join him in finalist mode, but this time Bergmann won't give the Dutchman another free pass, and wins the following round to advance to the losers bracket final.
From then on matches were played on stage, and Bergmann took to the stage with Crone to test their skills against French duo

Titouan "OmnipotZ" Le Maner. The Norwegian once again shows his ability to perform well offline, showing fine form and defeating Cook, who had the home-crowd advantage, to take first place. Bergmann was now within touching distance of the grand final and a chance to take home some of the $8,000 in prize money allocated to ESWC's TrackMania finals. The final hurdle was the consolation final, where the Norwegian would be tested more than in any of his previous matches at 2014's event. Pacher, Cook and

Andy "Sabre" Wilson were all eqaully hungry to reach the grand final, and despite Bergmann's determination and best efforts, he was unable to overcome the challenge they provided. Cook especially played phenominally well, taking first place after one of his all time greatest matches. Bergmann took fourth behind Wilson in third, ending his world championships journey and taking sixth place overall after a series of high-pressure elimination matches. 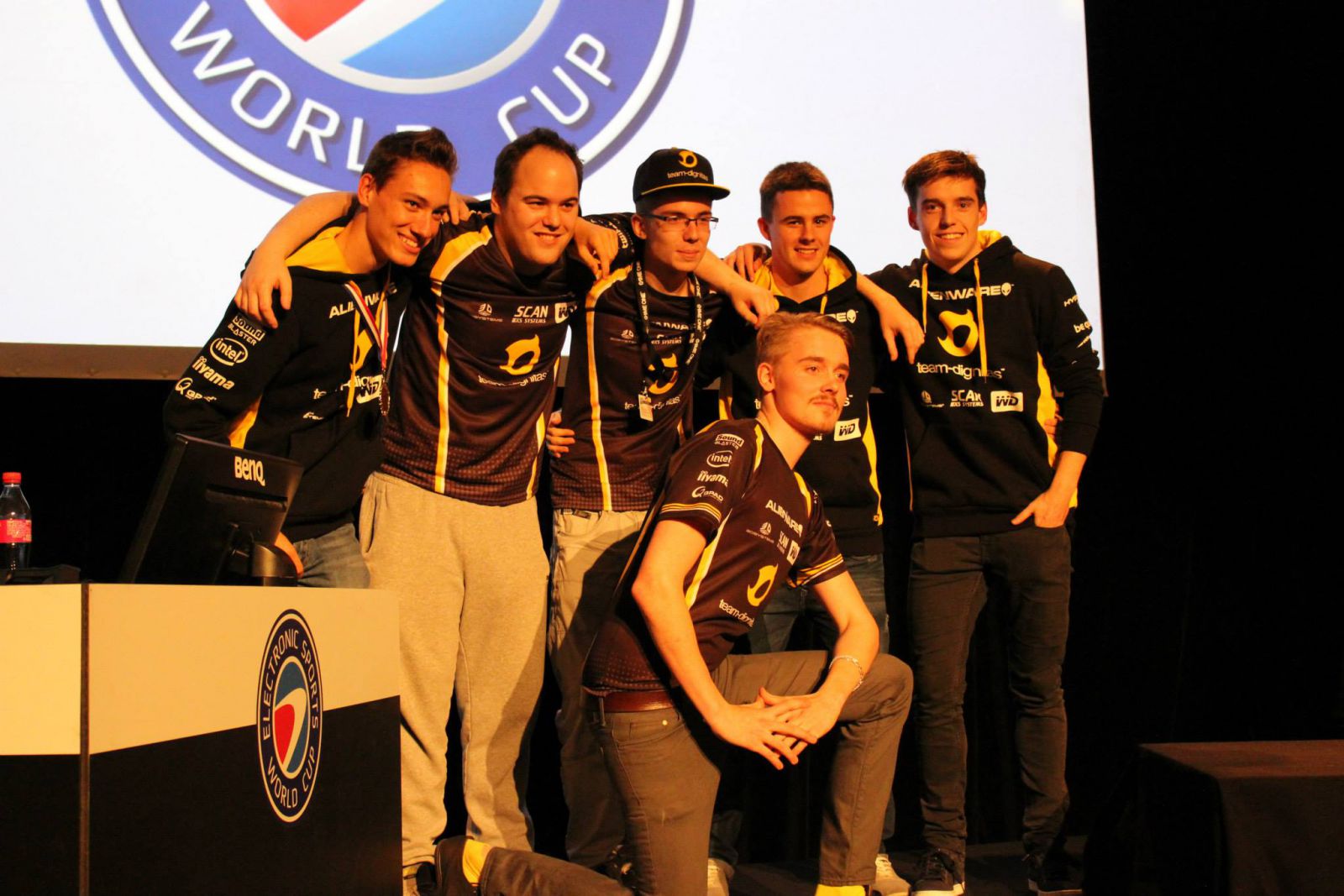 Bergmann with his Team Dignitas teammates at ESWC. Picture: Marlene Davidsen.
After Electronic Sports World Cup, Bergmann and his Team Dignitas teammates had little in the way of a break from competitive play. Stadium Team Championship 10 resumed after its break for ESWC, and Team Dignitas looked set to at the very least reach the grand final after the team's players achieved such great results at ESWC. In the toughest games of the playoffs—the semi-final and final—Bergmann had very little positive impact. He participated in all five submatches played over the two matches, but in every one scored either the worst or second worst. The reasons for this performance slump are unclear, but these results strengthen the argument that Bergmann is more suited to play in individual competitions than team-based ones.
Bergmann's final few games of 2014 were in the CPS14 group stage. He did not play much better in these matches than in the STC playoffs, and thus he ended the year with a string of disappointing results.
If we are to take the year as a whole, we see that Bergmann enjoyed varying levels of success throughout 2014. His most important result was by far a sixth place finish in Electronic Sports World Cup, and that alone justify's his inclusion in the Top 20. On top of this, a good showing in Stadium Giant Cup 1 and decent play in the team tournaments during the first half of the year places him firlmy in ninth place in our ranking.
ESWC 2014 WB quaterfinal and "the unexcepted" Video: Kalle "frostBeule" Videkull
Jump to next article in series.